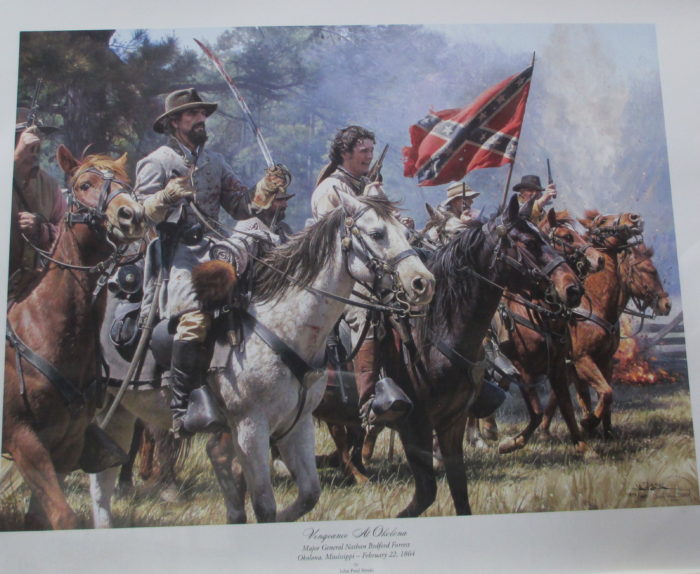 General Nathan Bedford Forrest was the ultimate warrior. Descended from a Gaelic heritage of fighting men, he was a soldier by nature. Standing at six feet two inches tall, broad-shouldered, athletic and powerful, he towered over most men. His steel blue eyes showed the unmatched force of will and savage tenacity that marked his personality.

His personal weapons were a number of Colt 36 cal. revolvers and a heavy long 1840 model cavalry saber (known as a “Wrist Breaker’), which he sharpened to a razor edge. Forrest did not just send men into battle, he led them. Such was the case in late February 1864 at the battle of Okolona.

After General Ulysses S. Grant captured Vicksburg, he sent General Sherman with 20,000 troops to link up with General William Sooy Smith’s 7,000 man cavalry force at the town of Meridian, Mississippi. The two forces were to spread devastation through the heart of the South. However, poor communication and planning led Sherman to return to Vicksburg. General Smith was now left alone to deal with General Forrest’s cavalry who were already countering the Federal advance. On the 20th of February General Smith had occupied West Point, unsure as to his next move. After receiving new reports of a huge force of Forrest’s men about to attack, Smith decided to withdraw towards Okolona.

On the 21st, Smith’s rear guard intermittently engaged Forrest and his escort troopers as Forrest’s brigades were not yet on the scene. Twice during the day Smith turned his force to face his pursuers only to have Forrest personally with his escort pass to the flank and rear of the Federals causing them to flee. During that eventful day General Forrest had again personally added another blue clad victim to his tally. At nightfall Forrest allowed his lead troops to rest a couple of hours, giving time for his other brigades to catch up. Smith pushed his retreat on until near midnight, and encamped near Okolona. But by four in the morning Forrest was on the move again and the next day brought a full engagement of forces.

During the battle, General Forrest saw his brother Col. Jeffrey Forrest fall as he was leading the charge at the head of his brigade. Rushing over to Jeffrey, he dismounted and found his brother had been killed instantly. Holding his brother in his arms, he chokingly asked his adjutant to take charge of his brother’s remains. He then remounted and ordered his entire command to prepare for a charge. Waving his saber in the air, the bugle sounded and at full speed he charged into the Federal position. The Federal line gave way and General Forrest engaged in some of the most deadly hand to hand combat of the war. Three more Federal cavalrymen were killed by Forrest’s saber. Within moments an artillery explosion brought down General Forrest’s horse. Forrest mounted another horse and in another charge this horse was also killed beneath him. Finally, Forrest’s famous gray war horse King Philip was brought up. It wasn’t long before King Philip received a neck wound in another advance. By nightfall Forrest had won a great victory. The remnant of Smith’s cavalry fled back to Memphis. They had learned like many others that no one could stop General Nathan Bedford Forrest.”

Be the first to review “Vengeance at Okolona” Cancel reply