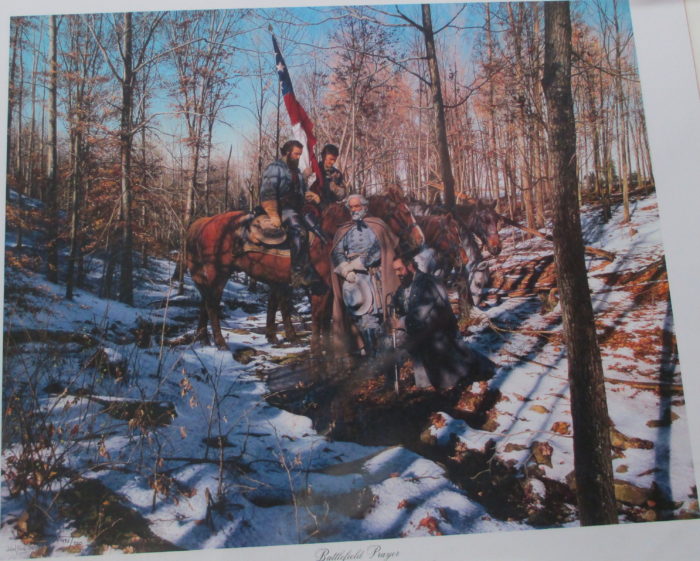 The momentous day was nearly at hand. On the morrow two great armies would clash along the hills of Fredericksburg, Virginia. The results of the battle might possibly decide the course of the war. Massive numbers of men in gray and blue had been gathering for weeks to engage in an epic battle to defend their homes, traditions, and honor.

Weather over the past several days had been pleasant with temperatures rising to the 50’s during the day. An inch or so of snow from the storm of December 6th and 7th still remained in the shadows and valleys, but much of the snow had melted.

In the hills south of the city, near Hamilton’s Crossing, three generals in gray reconnoitered enemy positions and formulated plans to meet the challenge that lay ahead. A tremendous weight of responsibility lay on the shoulders of these men, for thousands of men’s lives and the future of their country now rested with their decisions. No one knew this more profoundly than Generals Robert E. Lee, Stonewall Jackson, and J.E.B. Stuart.

With the sounds of battle preparation echoing through the woodland hills and valleys, the three generals paused a moment to rest from their morning ride and water their horses. Stonewall Jackson knelt before the Lord and the men prayed for the Lord’s blessing and guidance to help them with their great task. Many men would turn to their God before battle, if not for themselves, then for their families. The Almighty would hear thousands of battlefield prayers that day. — by the artist

Be the first to review “Battlefield Prayer” Cancel reply