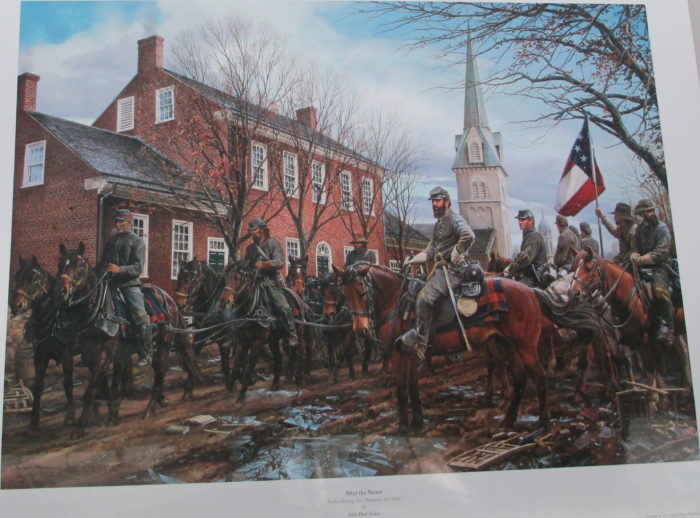 As the winter morning fog lifted on December 13, 1862, the Federal Army of the Potomac, under the command of General Ambrose Burnside, began advancing from its positions around the city of Fredericksburg toward Mayre’s Heights. By the end of the day Robert E. Lee had held his ground and won his most one-sided victory of the war. General Burnside and the Federal troops abandoned the once beautiful city. A chilling rainstorm drenched the night countryside as the Federal troops retreated across the Rappahannock. After they left, General Jackson looked over the still bloody battlefield and declared, “I did not think a little red earth would have frightened them. I am sorry that they are gone.” By the 16th, Confederate troops reoccupied Fredericksburg. Later as Jackson and his staff rode through the city their anger was aroused by the extent of the ruthless vandalism. A staff officer commented on how thoroughly the Federals had taken the town apart and asked, “What can we do?” “Do?” replied Jackson, “Why, shoot them!”

On Princess Anne Street General Jackson is directing the refortification of the city and setting up new defenses, as a horse-drawn artillery piece rushes by, pulled by a fine team of Morgan horses. Soon new orders will call Jackson away from the city he helped to defend so successfully.

I am very excited again to be focusing my work on one of my favorite generals, Stonewall Jackson. General Jackson and his staff are back in the city of Fredericksburg after the great Confederate victory. The painting depicts Jackson on Princess Anne Street in Front of the Market house / Town Hall building, with St. George’s Episcopal Church and the Courthouse in the background.

One of Jackson’s favorite aides, Sandy Pendleton, is depicted to the General’s right. The topographer Jedediah Hotchkiss, another staff member, is featured to the far right of the painting.

Before the battle of Fredericksburg, the Market house / Town Hall building was used as Confederate headquarters and barracks. During the battle, Federal troops used the building as a hospital. Today the Market house/ Town Hall is a museum, cultural center, and focal point of the City of Fredericksburg. All who are concerned with the preservation of historical sites and Civil War history express our gratitude to the Central Virginia Battlefield trust and the Fredericksburg Area Museum and Cultural Center for all they have done for us.

Be the first to review “After the storm” Cancel reply