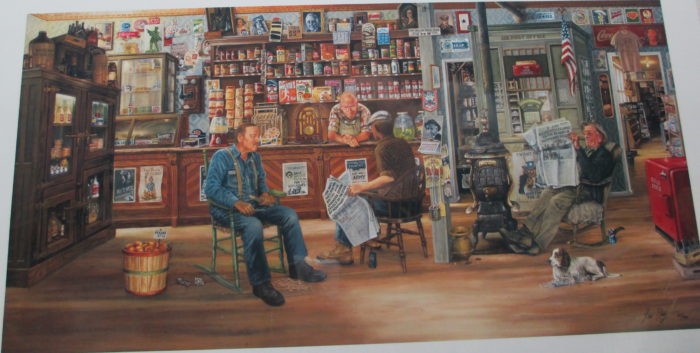 A Day to Remember

A DAY TO REMEMBER
Depicts the D-Day Invasion during the second World War – men in store discussing this. 8 deliberate “mistakes” in this famous painting making it one of Les Ray’s most popular images.

Are you aware of the “deliberate mistakes” in this painting? Because of these “mistakes” the value of this particular image has increased. There are eight (8) items in this picture that were not invented or discovered in that era. This painting depicts the “D” Day invasion, during the second World War.

1) There were no aluminum cans – Pepsi can on floor by rocker – Plastic had not been invented.
2) There is a plastic bottle in brown cabinet on the left of the picture.
3) There is also a plastic bottle of Log Cabin Syrup on second shelf behind the proprietor.
4) You will see an Alaskan Driver’s License Plate – Alaska was not a state.
5) On the far right, above the soda box are shelves of bread – bar codes..non existent.
6) Look at the “Uncle Sam Wants You” sign – and you’ll see www.com – no computers during that era.
7) Frito Lay – next to the Green Giant on the wall on the left – not on the market then.
8) Cell ‘Phone on floor next to middle chair – not invented then.

These items do not show up on this website. They will however, be detected in your Giclee Reproduction.

Now you ask why did such a perfectionist as this Artist make these deliberate “errors”? This is the reason – because so many art collectors would examine his paintings very carefully, and even come to the galleries where they’ve been known to hold up magnifying glasses to try and find mistakes. Les Ray thoroughly researches every single image before painting it, and there are NO errors of any kind of his Fine Work. He captures every single detail of whatever it is he paints. He did “A Day to Remember” as a joke, to see what others would now discover; and believe it or not – these same folks looking for mistakes in his other pictures, could not find any in this one. Now this very special painting has increased in value because of these “mistakes”. Ironic, isn’t it?

Be the first to review “A Day to Remember” Cancel reply