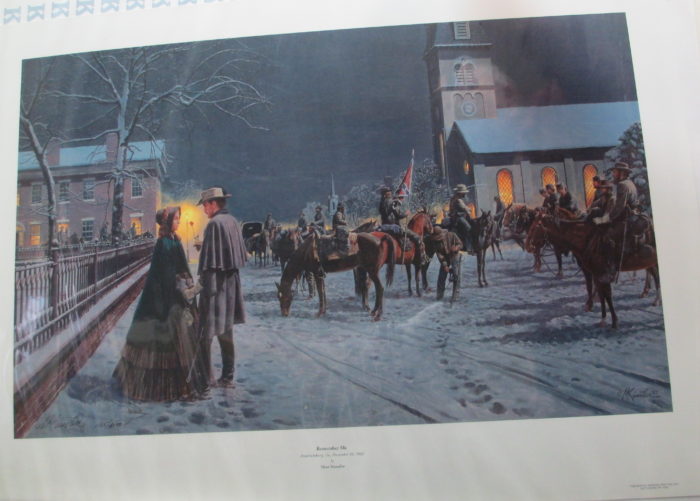 It was a moment to be cherished for a lifetime – however long that might be. Throughout the South, young men in gray and butternut left behind the familiar features of home to face a dangerous, unknown future at war. For most, departure meant leaving behind someone dear –knowing that a good-bye might be permanent. In many places, like Fredericksburg, Virginia, the home-front would eventually become the war-front as the tide of invasion washed over the South. The streets, structures and steeples so familiar in the peacetime past would become the landmarks of battle, adding hardship to the home-front and an additional heartache to the burden of not knowing the fate of loved ones separated by the brutal patterns of war.

In countless episodes repeated in every Southern state, a man and a woman were carried by the winds of war to a final, tender moment in separation. For many it would be a cherished moment never to be forgotten. Whispered assurances, a final embrace – then came the parting, perhaps forever, and both were left clinging to hope and the Biblical proverb: “Trust in the Lord with all your heart, and lean not on your own understanding…”

Every time I visit Fredericksburg I marvel at the beauty of the city. Inspired by a recent visit, I decided to do another painting of Princess Anne Street. By moving up the street further north from the viewpoint of my painting, Lee at Fredericksburg, I was able to feature St. George’s Episcopal Church again, and in a more prominent role. I was able to show the wonderful cast iron fence that surrounds the Presbyterian Church diagonally across from St. George’s and also feature the National Bank of Fredericksburg on the other corner. This building was a bank even during the Civil War and is a very famous landmark. The lights in the upstairs windows of the bank illuminate an apartment used by the head cashier and his family during the war. Both Abraham Lincoln and Jefferson Davis gave speeches on the steps of this building at different times. Lincoln spoke at the side entrance, while Davis made his speech from the front steps on Princess Anne Street. St. George’s was built in 1849. The central tower and steeple, long a familiar city landmark, have survived the ravages of time and war. The clock in the tower was set in place in 1850 by the City of Fredericksburg, which is still responsible for its maintenance. Not until the end of the 19th century did stained glass church windows become popular. During the Civil War the windows were diamond shaped, as shown. To depict Fredericksburg before it was damaged by battle, I consulted drawings done by E. Sachs and Co. of Baltimore in 1856. Using the beautiful city of Fredericksburg as a backdrop, I have painted a scene acted out thousands of times throughout the land: a soldier saying goodbye, knowing it may be for the last time.

Be the first to review “Remember Me” Cancel reply